It was time to leave Stung Trent and I was still hoping for a chance to spend some time with a local family but every time I enquired there was some sort of hidden agenda, cost, only groups or even tours that benefit the company rather than the people whom we visit.  However by chance whilst exploring the different options I did come across a home stay on the Island of Kaoh Trong, across the river from the town of Kratie. I made contact with a young man Vireak and he offered me a few nights to stay with his family.  I had no idea what to expect other than meeting him at the boat ramp.  When I eventually arrived at the rivers edge I looked down to where I had to board the boat, my aching body cried. There was no way I was going to navigate the 50 steps down with two packs and a dodgy foot which was still not 100% and was causing other pain related issues in my lower back.  I was relieved when I heard “are you Virginia” let me help you take your bags.  Vireak so young looking for 29, he had a smile from ear to ear.  He explained to me how we will be travelling to his home.  “First by boat then you will be taken on a motor bike by my younger brother, over the sand dunes and to my family home.  I will leave you here on the boat as I have to go to work.  I will be back tonight and if you cannot understand or need help here is my phone number.” Next thing I am sitting in a boat with more water in it than out, the water pump completely useless, but we made the 15 minute journey across the Mekong to the island in one piece and my bags still dry.  Somehow we were able to ride up and through the sand dunes with the two of us and my load.  At times all I could do is just pray the bike would not flip as it plowed through the sand.  In my mind I was ready to jump.

When I arrived I was greeted with open arms from Vireak’s parents. They gave me a tour of their home and property, Vireak’s mum also took me to her sisters house.  I met the extended family and helped prepare their dinner.  Everything is manually processed, no blender here.  On the way back I was given a tour of the village and introduced to the local community, I had no idea what the conversations were but I was warmly welcomed.  I started to realise that Vireak’s family are well respected and by starting the home guest adventure it was a way to be not so reliant on farming.  Farming can be great if you can reap some income and feed yourself, however as I was told, prices for food are often linked to prices set on international markets, if the crop is plentiful, then prices are low, if not and your crop fails then you are left with nothing until the next crop season, often a year or 6 months.  Vireak could see that by having another income stream his family could afford items for the home and I don’t mean a TV or a computer.  Basic cooking vessels, even a pump for water so they didn’t rely on the mule. Very simple things that would make his mothers life a little more bearable in the home.  He didn’t want to be like many farming communities where the younger generation go to the big city to find work, breaking up the family is not part of the Cambodians or his ethos.

Vireak’s mum and father were obviously nervous and it takes courage to let strangers into your world.  Even more so when you have a bunch of wealthy international guests.  However for the travellers that I met whilst I stayed, we weren’t concerned about the basic living quarters, we were more concerned that Vireak’s parents slept on the kitchen table and we took their beds.  Additionally, when more guests arrived  preparing food with such basic utensils became overwhelming, including the supply of water.  However the whole aspect of home stay is that you dig in and help rather than waiting for the food to arrive.  We enjoyed the experience helping Vireak’s mum in the kitchen and learning about harvesting food.  I even enjoyed learning from Vireak’s father whose family comes from the mountains, indigenous people who lived by hunting and gathering.  He has kept many of his tools and was proud to show us how they were made and their uses.  I wonder if he would prefer to live back there, something tells me if fear for ones life was not such a risk then yes.  Just like many Indigenous peoples, their culture is misunderstood and rejected, rather than embraced and used for land management and other useful skills. Oh the power of the modern world and its useless vices.

One could also not forget what Vireak’s parents had to go through during the Pol Pot regime.  This of course is still very raw with many Cambodians.  Especially the Indigenous peoples who were often the first to be collected and killed.  I had the opportunity to speak to many Cambodians who were very open and willing to tell me their story.  Many of the younger generation felt it necessary to tell me their families history during the Pol Pot regime.  Many elders made sure the younger generation understood what occurred during those dark days.  However I still get the feeling that there is an impatience for real change to occur.  However the ruling party rule with a smile and an iron fist.  Many people including Vireak are unsatisfied with the current regime and the only change is connected to Chinese investment.  This includes casinos, horrible resorts, cheap clothing factories, damming the Mekong, building private airports and destroying the environment for mango farms.  However to speak out or supporting the opposition means reprisals. They do however feel free to talk to foreigners.  Maybe the hope that word will get out and the international community will put pressure on their government.  Well I know the Australian government won’t put pressure on them considering the amounts we are paying to keep refugees locked up in Cambodian camps.

Vireak is so invested in improving his families lot that he often works to exhaustion.  He was working for a local NGO organisation, studying english, taking visitors on local tours and running the home stay.  I did get the feeling that the family felt overwhelmed with the response and with Vireak often away were not coping with the daily running of the business.  When working with Vireak’s mum in the kitchen, this became apparent when she had to prepare 10 meals using one coal cooker and water had to be rationed. Vireak spoke to me and took me to a relatives empty home that he was hoping to use for extra beds, however the expense was holding him back.  He needed to build bathroom facilities and refurbish the kitchen for his mother. I now wish I went to trade school when I was younger.

Apart from riding around the island I was invited to have a tuk tuk tour of the communities along the river on the mainland. We visited a Buddhist community and had lunch at a place where the locals relax mainly in the weekends. A series of hand made jetties which included hammocks and food. The main attraction the ability to swim in the river. The amazing thing about this type of resort was that once the dry season ends they pack up the jetties before the river rises. The amount of work that goes into building and then dismantling is incredible.

It was time to begrudgingly leave the island and stay at accommodation in Kratie as I had to catch an early bus to Laos.  When I arrived at my accommodation I regretted that I couldn’t help more.  It played on my mind that I should do more for the family that had given me so much.  I spent the rest of the day basically eating and drinking great coffee not even realising until I heard Men at Work playing in the background that the place I was staying at was owned by a 25 year old Australian. He had decided to give up his NGO position, sell all his worldly possessions to buy a run down hotel and cafe. It was his story that gave light to why work done by many agencies are going nowhere.  His frustration and lack of care by those who live in gated properties made him disillusioned with the nature of the work.  He was so invested in helping the community but felt nothing was improving.  So when the opportunity came he thought it would be better to buy a business, employ locals and give them real skills than continue to play the victim game.  The other bonus was that he had heard about Vireak and wanted to meet him and discuss a meeting of ideas and opportunities so I gave him his phone number.  However what would happen next just blew me away.  Later that night I received a phone call from Vireak who wanted to see me.  I was curious and happy that he would want to contact me.  When he arrived he spoke to me about his plans for future of the homestay and the concerns that his parents have.  I got a sense that it was getting out of hand.  He then pulled out a piece of paper, I read it, it was a resignation letter, he was going to quit his paid employment to work full time at the home stay.  I was a little surprised as this is a regular job but also in awe of him to take a big chance.  What I was overwhelmed with was that I was the first person he spoke to so he could get advice.  I was flattered to say the least. He really needed help with writing and also contacts that could help with building his business, I know for a couple of minutes I was about to cancel my bus to stay longer, but just like Vireak I was also on a journey.  I do hope I will return and also help in some way.  Especially his mother, they don’t want handouts they are just your typical Cambodian family hoping for a better future for themselves and their community. 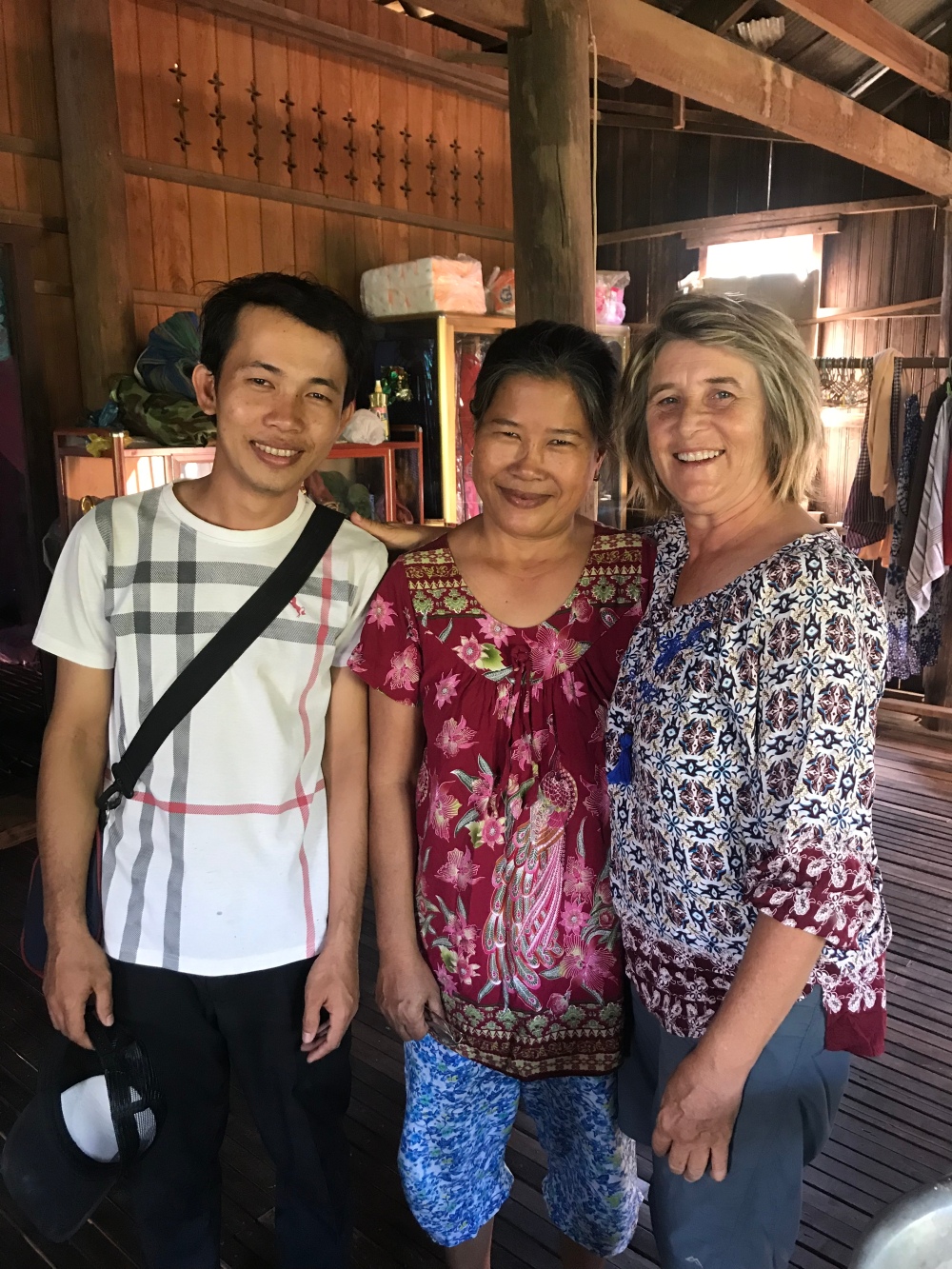 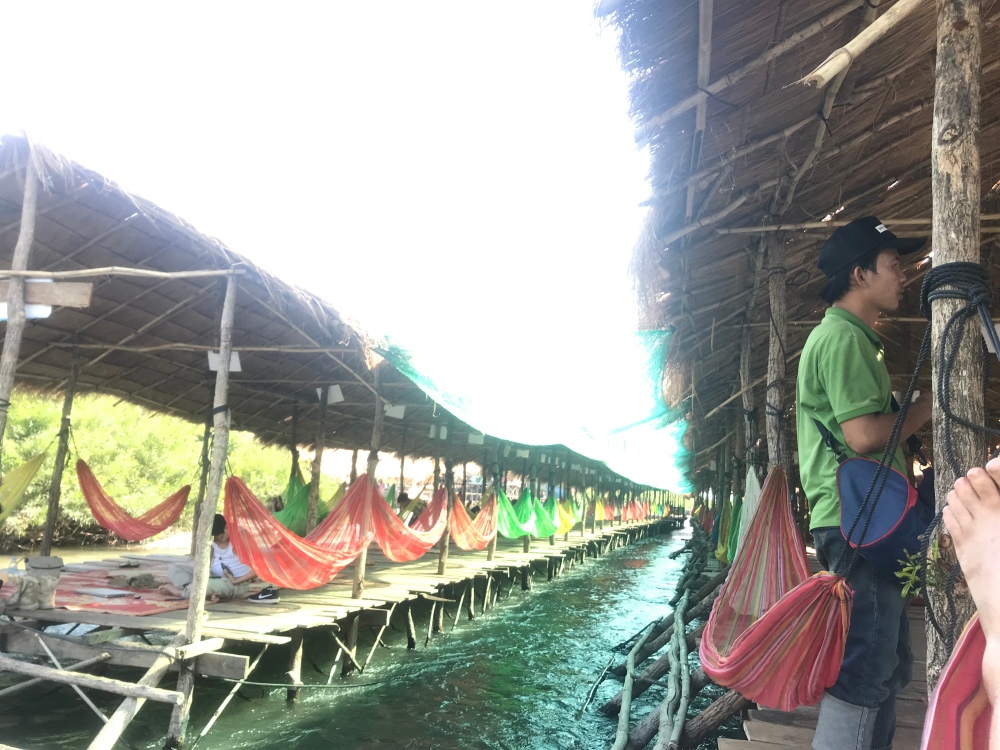 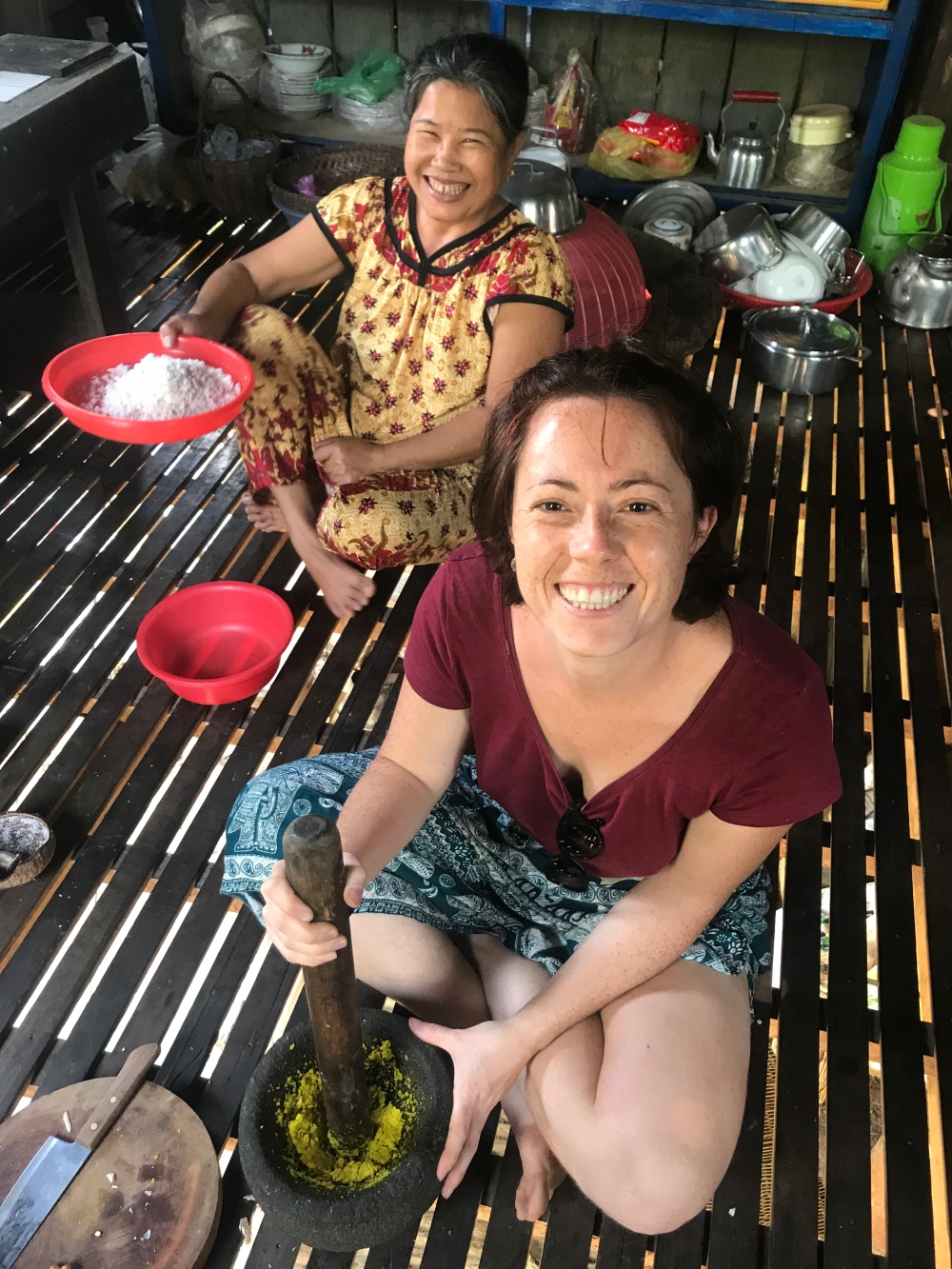 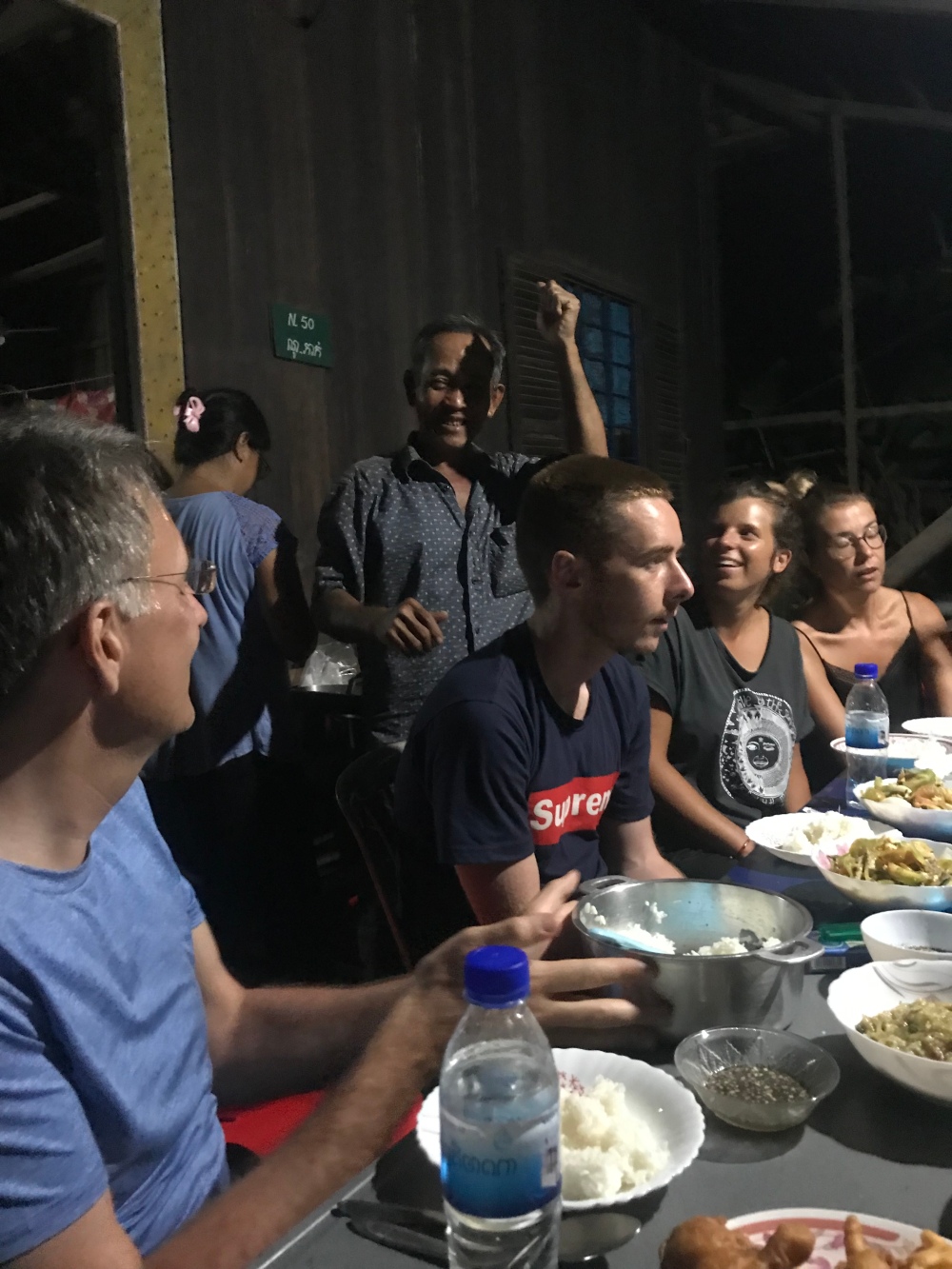